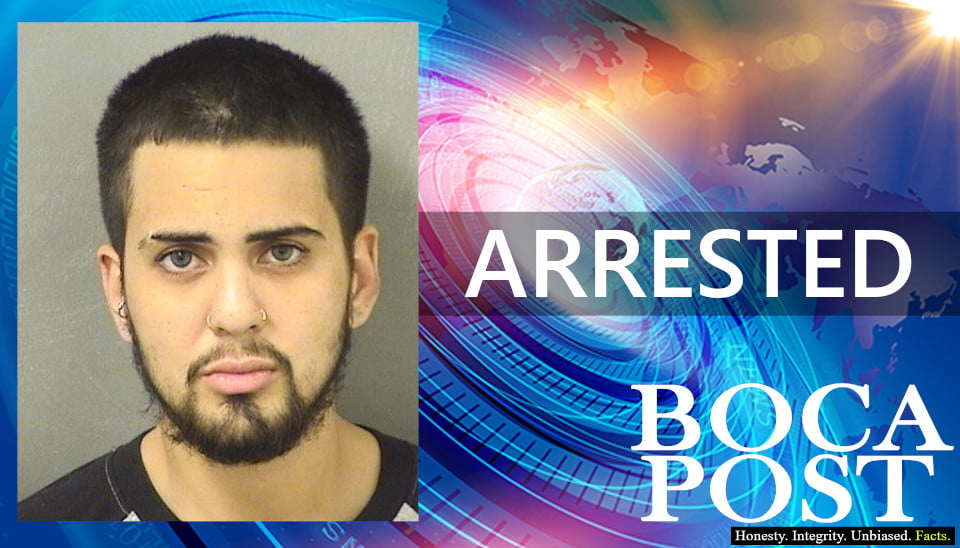 Kenzie Ruback, 24, of the 22000 block of Ironwedge Drive in Boca Raton, has been arrested early Thursday morning by the Palm Beach Sheriff’s Office. Boca Post has been notified that the charge filed is “784.045(1A2) AGGRAVATED BATTERY W/DEADLY WEAPON DOMESTIC”.

Ruback allegedly attacked his girlfriend with a kitchen knife after an argument the two got into about someone texting Ruback.

The entire narrative from the arrest affidavit can be found below:

On Wednesday, June 22, 2022, at approximately 21:52brs, I was dispatched to 22874 Jronwedge Drive in unincorporated Boca Raton, FL in reference to a disturbance. While en-route dispatched advised an anonymous caller advised she could hear loud banging and screaming.

Upon my arrival, I made contact with Kenzie Ruback (63/24/1998 H/M) who was later identified by FL DL and initially advised everything was okay. When asked if anyone else was in he advised his girlfriend was in the kitchen. Kenzie called her over and she came to the front door. I immediately observed the female later identified by FL DL to be <redacted> what appeared to be fresh blood on her shirt, a laceration to the back of her left shoulder, and bruising on her arms and legs. <redacted> and Kenzie were immediately separated prior to gathering information.

While speaking to Kenzie, He advised He and <redacted> got into a dispute over <redacted> going through his phone. Kenzie stated <redacted> began to go crazy and began smashing items in the house, Kenzie stated he had video of the incident however stated the video was not working properly because the sim card was taken out. Kenzie stated during the dispute, <redacted> attacked him by punching him repeatedly in the head at which he picked up a kitchen knife to keep her away. It should be noted I did not observe any marks or bruises in the area where Kenzie stated he was struck. When asked how <redacted> received the cut on her shoulder, Kenzie advised because she was acting crazy and to defend my property.

<redacted> sustained a singie 2-3 inch in length laceration to the back of her left shoulder. The wound had both fresh and dried blood. <redacted> refused medical attention and fire rescue. There were multiple kitchen knives located in the resid and photos were taken.

<redacted> stated the two have been in an on and off sexual relationship for the past year. The two lived together as a family in the past. The two do not share any children together.

Based on the above observations and investigation, I find probable cause to believe that Kenzie violated 1 count of aggravated Battery W/ Deadly Weapon (Knife) FSS. 784.045 (2)(B). Kenzie did intentionally or knowingly cause great bodily harm to the victim and used a deadly weapon by cutting the victim with a 4-S-inch kitchen knife. I placed Kenzie in handcuffs and took him into custody. The handcuffs were double-locked and checked for proper fit. Kenzie was placed into my marked patrol car. Kenzie was transported to PBSO District 7 to complete the necessary documents. Kenzie was later transported and turned over to the Palm Beach County Jail.

Ruback was booked into the Palm Beach County Jail at 2:38 on Thursday morning. At last check, the state has dropped the charges, most likely due to an uncooperative victim as is commonly the case in Palm Beach County.

News Desk - August 6, 2022 0
A Greenacres man is charged with the death of a 17-year-old Florida boy after a road rage incident on the turnpike in Boca Raton last year.

Where To Get The Cheapest Gas Near Boca Raton